For such a small country, Luxembourg sure has a lot of castles! The Visit Luxembourg website offers a full list of 26 different castles to visit and includes opening hours, directions, and whether reservations are necessary. 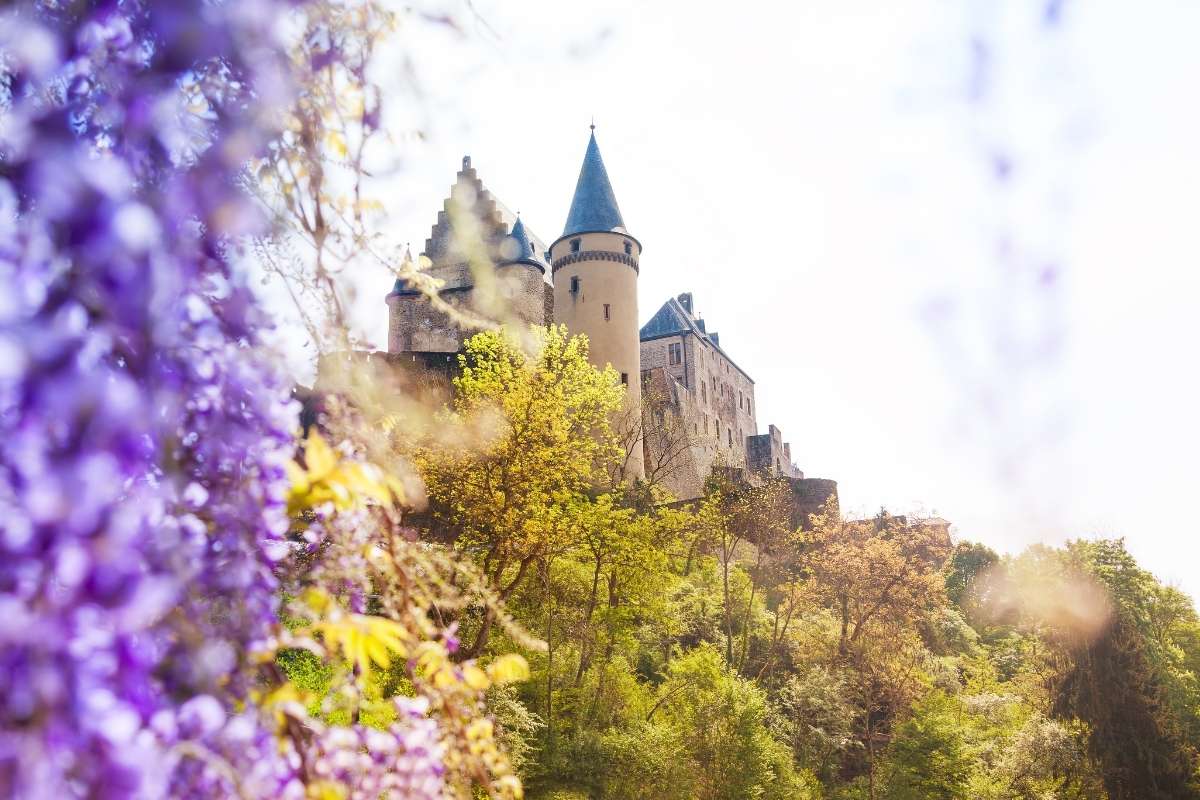 Earlier this year, my friends and I hiked through Berdorf and decided to take a short bus over to the Beaufort Castles. We thought Beaufort only had one castle, but as it turns out, there are two: a medieval castle built around 1050 and a Renaissance castle built in the 1800s. We didn’t go inside the castles (you need a guided tour for those!), but I’m sure it’s just as beautiful as the outside. Guided visits take place from Thursday to Sunday at 11 AM and 4 PM, and guided tours can be booked upon request. These castles also have on-site parking, which means they’re easy to visit!

Located about an hour north of Luxembourg City, Clervaux is full of things to do and places to see—including its castle! We’re not exactly sure of its origins, which makes it all the more fascinating. Currently, it’s home to The Family of Man, a photography exhibition put together by Edward Steichen. I visited The Family of Man a few months ago, and it was absolutely fascinating. It details humans in all stages of life in various cultures, and all the photographers come from different backgrounds. If you’re interested in the castle itself, you can book a guided tour! (One more thing: while in Clervaux, you should also hike up to the Abbey for some delicious apple cider!)

Esch-sur-Sûre is truly one of Luxembourg’s hidden gems! There’s so much to do there (here’s a more detailed list of suggestions!), and it’s a great place to get away from the bustling city life. I visited Esch just when the weather began to warm up, and the castle was definitely one of the day’s highlights. Getting there was a bit difficult, but that’s also because we were using public transportation. Because of the castle’s rich history and gorgeous exterior (we didn’t go inside this one either), though, I highly recommend it! You can call or email to book a guided tour or an audio tour!

Earlier in the year, my friends and I hiked in Larochette and passed Castle Meesebuerg. It was beautiful, but also private property, so we weren’t able to explore it very closely. We decided we wanted to give Larochette and its castles another chance, so we headed up to Larochette Castle for the day, and it did not disappoint! The castle is open daily from 10 AM until 6 PM, and tickets are €5 for adults and €6 for children ages 6-16. It was a very quick walk from the bus stop (Spuerkeess), but getting to Larochette itself from Differdange took a bit longer than we expected. Nevertheless, it was worth it! Larochette Castle has been destroyed and rebuilt several times over the past centuries, which means it has a rich history attached to it as well.

Vianden is probably one of Luxembourg’s most well-known castles. I’ve had multiple people—both locals and fellow students—recommend it to me, and it did not disappoint! The castle itself is located about 15 minutes from the train station. It’s at the top of a hill, so the walk up can be a bit tiring. But it’s definitely worth it! You’ll be treated to some gorgeous views of the city, and the castle looks pretty stunning from below as well! The entrance fee is €10 for adults, €5 for students (just make sure to bring a student card or ID!), and €2.50 for children ages 6-12. We also recommend getting an audio guide for €2 more. Vianden has a very fascinating history that you don’t want to miss out on!

A fun fact about Wiltz Castle is that what you’ll see when you visit it isn’t the original castle! The original castle was actually located where the current church is, and it was meant to protect the town. Unfortunately, the location was terrible, which means the castle couldn’t really do its job, and it was ultimately burned down. In addition to a fascinating history, Wiltz Castle is gorgeous to look at, and you can certainly spend a fun day in town. Visit their website to schedule a visit or guided tour!

I’ve walked by the Grand Ducal Place more times than I can count! Chances are that if you’re in Luxembourg City, you’ll encounter it at some point. So there’s no reason to miss it! Guided tours are also just about to resume; find more information here. While on the tour, you’ll learn all about the palace’s behind-the-scenes secrets, including what life there is like and which rooms are used for which purposes. Guided tours will be €14 for adults and €7 for children ages 4-12.

Mont Saint Jean Castle is full of history—it has been constructed, torn down, and reconstructed multiple times over the past centuries. It’s belonged to lords, kings, and monks, among others. It was even in use when it was in ruins, as a quarry for nearby villages. It’s also got a lot of secrets inside its walls, like the Virgin of Mount Saint Jean who has been turned into a snake and awaits her savior. This castle is a great one to check out if you want to learn a bit more about historic Luxembourg! It’s relatively easy to get to, and Dudelange is a great city to spend a day in.

Bonus: Valley of the Seven Castles

I’m including this one because while I technically haven’t visited Guttland yet, I’ve heard that the Valley of the Seven Castles absolutely cannot be missed! It’s a 27 kilometer drive that takes you through some of the most scenic parts of Luxembourg. You’ll see seven different castles—Mersch, Schoenfels, Ansembourg, Hollenfels, Ansembourg again (it’s got more than one castle!), Septfontaines, and Koerich. You start at either Mersch or Koerich and make your way to the other one. You’ll be able to learn some fascinating facts about Luxembourg’s history and architecture as well! The cost of this activity will depend on which and how many castles you choose to go inside of, as there are several that allow visitors. You can also make the drive a longer activity by staying in some of the cities—there’s plenty to do in Mersch, for example!

Happy exploring! Which Luxembourg castles are your favorite? Let us know in the comments!