Luxembourg has some beautiful bike trails for you to explore, whether you’re an experienced biker or someone who’s getting on their bike for the first time in years, Luxembourg has the route for you. Here are some of our favorites divided by skill level...happy biking! 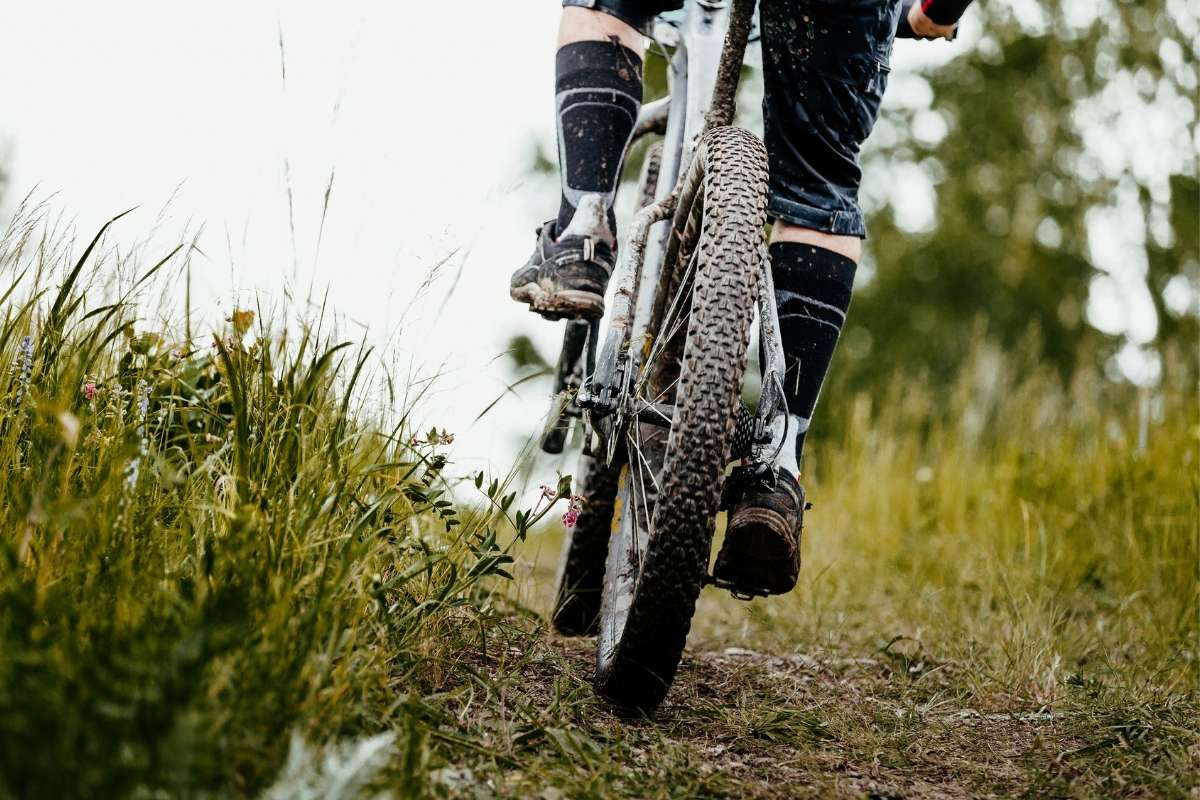 Luxembourg has numerous mountain biking trails with varying lengths and levels of difficulty. This means there’s definitely one for you! While biking, you’ll be able to see some of Luxembourg’s beautiful natural scenery while getting a good workout in. And if you need to rent a bike, don’t worry—Luxembourg has you covered! Click here for some great bike rental businesses.

For any beginner mountain biker, or for anyone who’s looking for an easier, more relaxing trail, we recommend the Bech trail in the Mullerthal Region! You’ll pass by some beautiful rock formations and bike through large, stunning forests. You’ll also bike over plateaus and an ancient rail track. The trail is clearly marked in one direction, and there are a few hills you have to bike up and down. It’s about 13 kilometers long!

There’s also a family-friendly trail in Wiltz if your kids want to come along for a ride. It starts below the church in Niderwiltz, where you’ll cross a bridge and head up a steady incline. Then you’ll bike by an airfield in Noertrange and eventually come back to where you started. There are some hills on this trail, but it’s also only 11 kilometers and should take just under two hours.

If you’re looking for a medium-level trail, check out the one in Grevenmacher! It starts near Potaschberg, an archeological site that has some ruins of a second-century funeral monument. You’ll bike to the edge of the valley and back, and end in a great spot for some sight-seeing! Grevenmacher has some beautiful vineyards, tasty wine, and lots of museums. The trail is 15 kilometers long and has some sharp inclines and declines.

Another option is Belvaux, which looks a lot harder than it actually is! It’s got some steep hills, but the momentum you’ll get going down them makes coming back up not too difficult. You’ll get some beautiful panoramic views of the town and region, and for an additional challenge, try to make it through the entire trail without putting your foot down! This trail is 28.1 kilometers long and takes two to two and a half hours. The vast majority of Luxembourg’s biking trails are medium-level in difficulty!

For our experienced mountain bikers, try Berdorf-Beaufort! This is a difficult trail with lots of inclines and declines, but the views you’ll see along your ride are definitely worth it. You can start at Camping Maartbësch in Berdorf, or at the church in Beaufort and ride the trail backwards. Just keep in mind the trail is marked in one direction! This trail is 39 kilometers long and involves biking by some bizarrely beautiful rock formations.

Or, you could try the routes in Clervaux, which offer advanced trails. Our favourite advanced trail with lots of hills, starts at Place Benelux. You’ll then head north towards the municipal park. Then, you’ll bike through the forest Op der Woltz before eventually crossing the Woltz river. You’ll bike through some more beautiful forests and by some historic abbeys before heading back to Clervaux. This trail is 25 kilometers long and takes about three hours.

Our last recommendation is Vianden, a trail that lets you explore the countryside and see some beautiful views of the town! You start at the bus station and head up to SEO’s hydroelectric power station. There are some steps on this trail, so you’ll have to dismount for a part of it. You can take a short detour to visit the Notre Dame Chapel in Bildchen, and you’ll also bike right by Vianden Castle before ending up right where you started! This trail has a rather steep incline right in the middle, is 22 kilometers long, and should take a little over two hours.

Finally, for expert mountain bikers, we’ve got two trails for you! The first is in Esch-sur-Alzette and has been described as “the most exciting and spectacular trail in southern Luxembourg”. You’ll bike through a nature preserve in Lalléngerbierg, which was shaped by mining ore. The trail comes with some beautiful views of the Minett Region. You’ll get to see some stunningly green areas and sky-high sandstone cliffs. Before embarking on this trail, however, keep in mind that the loop to Brucherbierg is only open on weekends or after 5 PM on weekdays. Remember to stay on the marked trail at all times! This route has a lot of hills, is 36.5 kilometers long, and should take three to three and a half hours.

Our last trail is in Dudelange, and it’s a big shorter—only 27.6 kilometers! It takes you through old mining areas and lets you see how the natural vegetation has taken over them. You can start in Dudelange (Parking Boulodrome), Tétange (Parking Schungfabrik), or Rumelange (Parking Terrain de football). Because this is an expert-level trial, expect lots of steep hills. It should take two to two and a half hours!

Ever wanted to explore Luxembourg on a bike? You can with the national cycle path network, which consists of 23 different trails covering all the country’s different regions. Some of these trails are extremely long (Schengen’s is 89 kilometers!), but they’re a great way to see some of Luxembourg’s castles and natural beauty. You’ll bike alongside old railway tracks, lakes, and villages!

Our first recommendation, which is an easy trail, goes to Echternach from Luxembourg City! You’ll head towards Pont Rouge and get a beautiful view of the Alzette Valley and old town. Then, you’ll bike through Kirchberg before reaching the Mullerthal Region—Luxembourg’s Little Switzerland! You’ll get to see some of the natural beauty that places like Berdorf and Consdorf have to offer. Finally, the trail ends in Echternach, where you’ll find lots of fun things to do! This trail is 43.5 kilometers long, but is mostly downhill.

Another easy trail is in Bereldange and takes you form just outside of Luxembourg City to Ettelbruck. The trail largely follows the railway, which makes returning to the city by train very easy! While biking, you’ll see Mersch and the beautiful Eisch valley, including its beautiful castles! Then you’ll head through the Adrennes, which has stunning meadows and orchards and a palace currently inhabited by the Grand Ducal family! This trail is 31 kilometers long with some steep hills.

We’ve got three medium-level trails for you as well; the first is back in Belvaux! It takes you through Les Terres Rouges, a former industrial area. You’ll be able to see how both mining and nature affected the landscape. This route does follow some busy roads and highways, so it’s not necessarily the best for small children. A highlight of the trail is Esch-sur-Alzette, Luxembourg’s cultural center! It’s a great place to take a break for some shopping, and it’s got the longest pedestrian street in all of Luxembourg. The bike trail ends in Pétange and is 42 kilometers long; it’s mostly downhill, so it should go by pretty quickly!

We’ve also got another Luxembourg City trail for you—it starts in the Grund and forms a complete loop around the city. You’ll get to see the natural beauty of Kockelscheuer, with its lakes and forests, as well as some of the historic buildings in the old town. You’ll also bike alongside the cliffs overlooking the Alzette valley before ending back up where you started. This trail has some steep hills at its beginning, but is mostly flat for the last two thirds. It’s about 43 kilometers long!

Finally, you could try the trail in Reisdorf. It’s a beautiful route that links the Ardennes with Mullerthal, while also taking you through Diekirch and Ettelbruck. These are great places to stop and and enjoy the city life, get a bite to eat, or do some shopping! You’ll then bike along the Sûre and by Bourscheid fortress before getting a beautiful panoramic view of the south of the country. You’ll end up by Goebelsmuhle station, so catching a train home will be easy! The trail is 71.2 kilometers but practically all downhill.

If you’re looking for a harder trail, check out the one in Wiltz! Most of it runs along the Wiltz river, and the scenery is absolutely gorgeous, especially in the spring and fall. The views around Kautenbach are particularly beautiful. You can also hop on a train for a short break and head over to Bourscheid Castle, which is a medieval castle overlooking the Sûre Valley. As you leave Wiltz, you’ll ride through stunning forests and fields a safe distance from busy roads. Your journey ends not too far from the Belgian border! While this trail is one of the shorter ones at 17.8 kilometers, it’s mostly uphill, which is what makes it so hard.

These are just a few of Luxembourg’s bike trails! There are plenty of other ones to explore as well; let us know which ones are your favorite! In the meantime, happy biking!