Cleaning Up Our City!

The snow stopped long enough for a lovely afternoon on Sunday, and what better way to spend it than helping our community? Alix put her girl-scout cap on for the afternoon and went to ‘Serve the City.’ 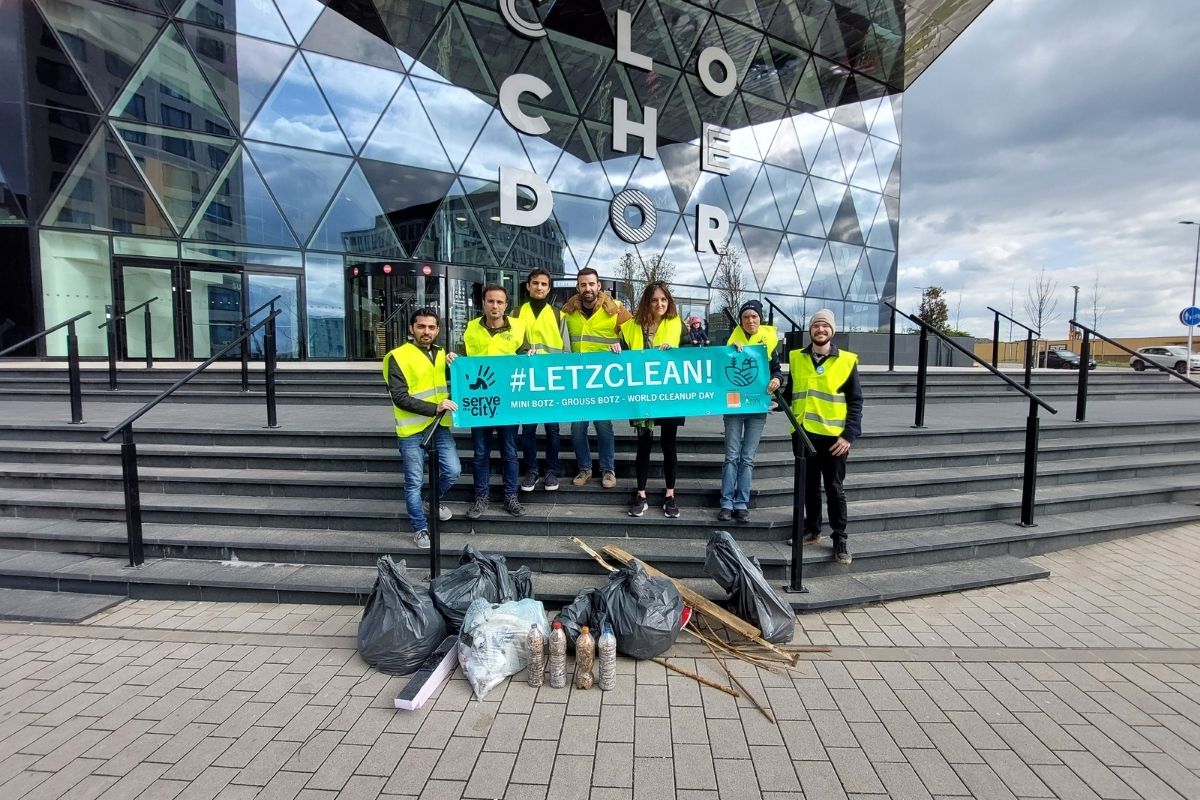 I have to confess writing this article that I do actually know “Serve the City” having seen them walking through the city’s streets on a Saturday afternoon; offering food to the homeless. However, I didn’t know they were also interested in projects regarding the environment. So when I heard about Sunday’s clean up of Cloche d’Or I was intrigued and decided to sign-up and rack up some karma points.

Whilst writing this now, I can’t think of a better way to pass a couple of hours on a Sunday. Rather than watching a season of something on Netflix, get out there; get some fresh air, a little exercise and some much needed brownie points.

The Serve the City volunteers for our ‘mini botz’ were César and Jerome, both super friendly and nice, as well as knowledgeable about litter and its connection to our carbon footprint. César explained that whilst the EU generates an average of 492Kg waste, Luxembourg generates an average of 607Kg. So we can all do our little bit by not-littering or offering to clean up what’s all ready there. Armed with gloves, sticks, plastic bags, valorlux bags and some empty bottles we were set to work picking up general litter, collecting all the plastic and recyclables or, if you were very lucky, picking up all the cigarette butts off the street (hence the plastic bottle). It might not seem it at first, but it’s tiring, back-breaking work, especially for the poor sole with the cigarettes. Interesting fact but cigarettes make up more than one-third—nearly 38 percent—of all collected litter, did you know that?

Unlike some other events held by s.a.r.l’s this isn’t an incredibly ‘social’ type of event. You have a small debriefing of what areas you are going to cover and then off you go on your merry way. If you aren’t the type to enjoy some solitary time, you can team up with someone else, or even bring a friend along to keep you company. Two of the members of our group were refugees from Kazakhstan, a fact I unfortunately only learnt at the end, much to my regret. César and Jerome checked on us throughout the two hours, which went surprisingly quickly all said and done.  The total weight of our litter was 31kg; most of it I’m convinced were masks, but to be fair we did pick up some odd construction objects and a broken road sign. The total amount of litter is tallied each year and then compared to other cities where Serve the City operates.

As we loaded the bags into César’s van, Jerome explained the reason for the stacked up bottles of cigarette butts;  they give the cigarette butts to a company that repurpose them and the rest of the waste is disposed of as required. Another win for the environment.  And with that everyone disappeared their different ways to enjoy the rest of their Sunday having spent two hours pretty well indeed.

For more information on Serve the City visit www.servethecity.lu