Learning to Ride a Bike

As a child, growing up in Central Asia, I never learned how to ride a bike. I cannot blame my parents. Trust me, they tried. 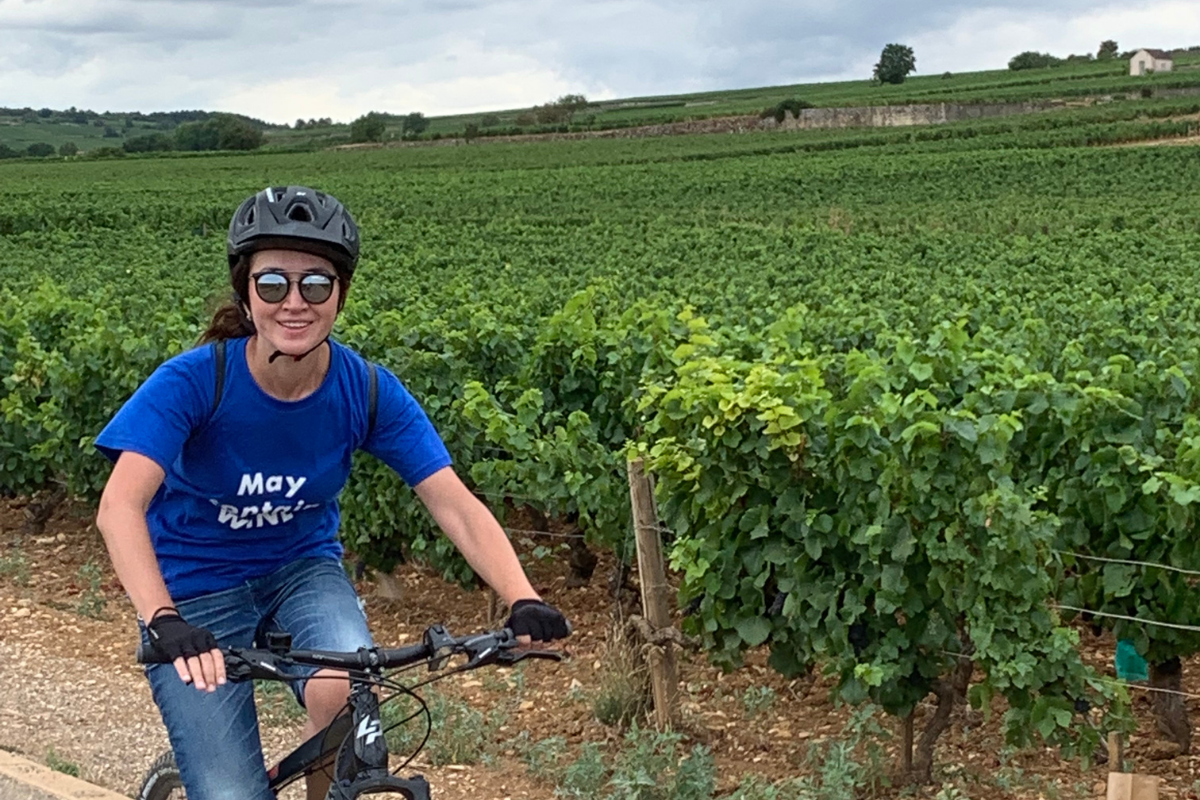 I have snap-shot memories of holding onto the handlebars of my neighbour’s bike. Those memories end abruptly with a collision with a boy resulting in pain on my part. What I did not realise at the time is that shortly after the accident, this boy perhaps achieved two-wheeler independence. Due to my traumatic experience, I developed a poor attitude towards biking and never acquired this skill. Luckily, there was nothing about my adult life that appeared to be diminished by not knowing how to ride. Living in London, I could get anywhere I wanted by tube, bus, uber, taxi or on foot.

It wasn’t until I was approached by my friend, Amanda, to go on a once in a lifetime wine tasting cycling tour in Burgundy that it occurred to me that I just might be missing out. Suddenly, I envisioned two independent women pedaling along the grand cru vineyards, chatting, laughing and doing some fine wine tasting along the way. I couldn’t bear the thought of not going, so at 38 years old, I decided to face my childhood fear and learn, once and for all, how to ride a bike.

So on the second week of July, I was chatting to another good friend of mine and expressing my desire to go join the wine tasting cycling tour. It took her a few seconds to find the adult cycling course organised by ProVelo.lu a.s.b.l.. This is an organisation that not only promotes safe cycling, but also represents the interests of cyclists in public related matters. I phoned them up straight away to find out that sadly, I was just a few hours late to sign up for their English-speaking course, so I took a bold decision to take the adult cycling course in French and Luxembourgish. One big challenge leads to another! This was another massive stretch to my confidence as I set myself not only to learn a new skill, but in two foreign languages I have yet to master.

The following week, another friend took me shopping for cycling accessories. I bought some elbow and knee protection meant for skate boarders. Yes – I was now all geared up: gloves, pads and helmet. By then I felt mentally ready and ‘dressed up’ for my grandiose trip.

For kids, it is usually the parent’s decision to learn, but when you are an adult, it is your decision. My course mostly consisted of women, and we each shared personal stories about why it has taken us so long to learn. Interestingly, for most of them it was psychological. The details are different, but the basics of these stories is the same- they tried at a young age, but all they can remember is the crash.

I felt inspired by all these brave women who had the courage to dust themselves off and decide for themselves that they wanted to learn how to ride a bike.

Our instructor Monique was very patient with us, especially with me as she had to explain some parts for me in English. She was like a high school gym teacher: supportive, meticulous and very calm. She probably said “stay calm, try your way and try again” at least a dozen times during the course of the lesson. I think the same applies generally in life to “stay calm, be persistent and keep trying”.

During the lessons, I fell, stayed calm, tried my way and finally after a few days of training I achieved a very strained glide on the yard of Carré in Hollerich, where we have been training. “Woohoo!” I shouted from the other side of the yard cheering my other brave comrades. We were in this together! I had never felt so lame, free and proud simultaneously in my life. I began going in circles, clockwise and counterclockwise, straight and I could even look back a little bit while pedaling. After all, learning to ride as an adult is no harder than learning as a kid as long as you take the same step-by-step approach to the process—and push grown-up fear and nerves out of the way.

Trip of a Lifetime

And there we were, driving to Burgundy, while we had Dua Lipa signing ‘Cool’, I was mentally reciting the checklist of how to ride a bike and I was not feeling ‘cool’ at all, as my mind was occupied as how not let Amanda down, who had planned such a great trip for both of us while also inspiring me to take on a lifelong skill.

The following morning, we went to Bourgogne Evasion, one of the best agencies who organises guided and self-guided cycling trips for a day or more in Burgundy. It was time to pick up our bikes to go on our self-guided “Château Cyclo Vino Tour.” Upon my first view of the bike, I immediately thought ‘Oh, man, these bikes looked all different from what I knew!’ I was used to an ergonomic trotinette and a very light bike at my cycling course, but now I was facing the entire collection of different bikes! They ranged anywhere from classic to electric. There were also mountain and road bikes. So many to choose from!

After my second failed attempt to jump on an actual bike, Amanda shot me a quizzical look. She was supportive and understanding which gave me the confidence to “stay calm, try my way and try again.”

After a short briefing about how to use our chosen bikes while adjusting our smartphones to get orientation, we collected our picnic boxes. We then set off on our self- guided bike tour along the famous Côte de Beaune and its route des vins, vignobles, domaines and castles. It was really happening!

After a few false starts, I felt confident I had the hang of it. I must admit I was generally lagging behind Amanda, but I was, in the most basic sense, feeling ecstatic, as I was riding a bike in beautiful Burgundy.

The sheer number of bikes on Route de Vin is amazing. You see children as well as grown- ups, pedaling with the grace and synchronicity of a Tour de France peloton and greeting me upon passing. ‘Bonjour’ My greeting was a bit different. ‘Please beware of me, I am the first-time bike rider!’ I continued in English. They all smiled, thinking perhaps that I was exaggerating. Little did they know!

In the end, I had an unforgettable experience, learning more about wine and French history, meeting very interesting people and having an opportunity to accomplish my goal all the while acknowledging and rewarding myself (every evening) living what ‘Bon Appétit’ stands truly for: The hearty appetite and a glorious meal.

This journey has taught me a lot about myself and I am taking this lesson into other areas of my life.

I see so many women who are afraid to start something new or they think it is too late to start or to learn a new skill. I was one of them, but am happy to report, I am not anymore. I have something tangible to show and say, ‘Holy Moly, I did it! I have learned how to ride a bike in my thirties.’ I did not let the fear of failure stop me from pursuing a dream and I can officially say I am now open for my next adventure!