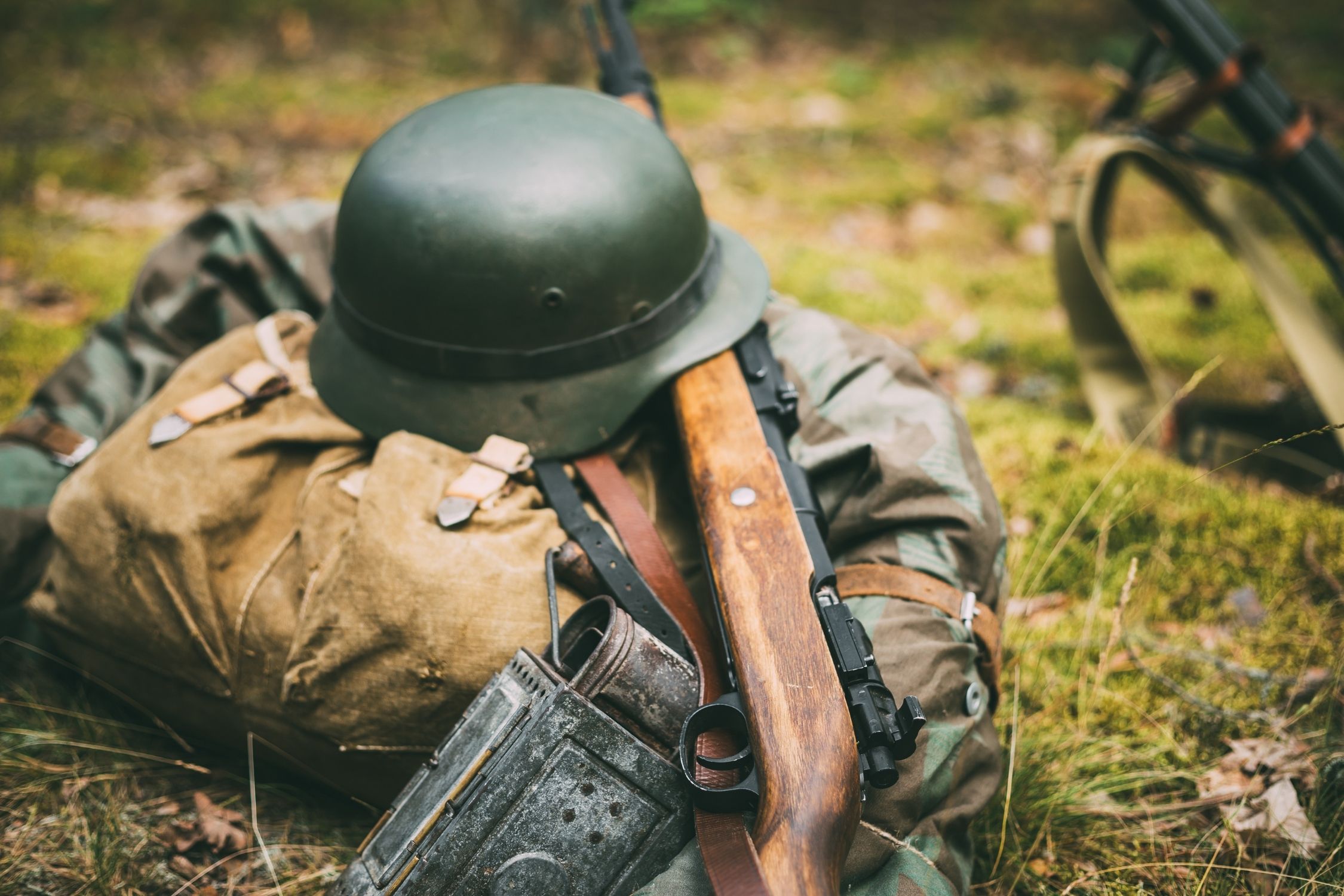 Visiting the places where important world events occurred gives you an understanding you just can’t get from books or pictures, and a chance to really empathize with the people who lived them at first hand. Many of these sites recall some of the darker moments of human history. Many present past events which can be difficult to think about or explain. These places might be about war, but they are also sites of reflection and inspiration.

Royal Museum of the Armed Forces and of Military History, Brussels

This huge museum has a massive array of objects on display, telling the story of a thousand years of military history. The modern state of Belgium was founded in the early nineteenth century, and prior to that the territory had been managed by a succession of different rulers. The museum tells the story of the military and technological history of Belgium, from medieval armor to F16 aircraft, as power changed hands over time. There is an impressive air and space hall and an entire department devoted to tanks.

For families and children plenty of interactives are provided. For example you can try your hand at the controls of a fighter jet. There is a special audio guide and trail for families (aimed at children aged 8 and older).

The Battle of Waterloo marked the final defeat of emperor Napoleon Bonaparte. He had spent the previous twenty years trying to build a European empire by invading various countries. It was thought that he had been exiled but he escaped, rallied his troops and advanced on Brussels. The British Duke of Wellington led a coalition of troops from Belgium, Germany, Russia and the Netherlands against the French. On the 18th June 1815 it was the coalition forces whom prevailed.  It was a bloody battle, much of which was fought in close quarters. It ushered in 100 years of comparative peace in Europe.

The memorial has a modern museum which interprets the story of Waterloo and events leading up to it with the use of lots of multimedia and visual effects. Also on site is the Panorama building housing a huge painting carried out in 1912 that depicts the battle. The Lion’s Mound was built in the 1820s. From the top of this hill you can see all over the battlefield. Finally, you can also visit the recently restored Hougoumont Farm, the scene of bitter fighting.

German invasion forces crossed the Belgian border in August 1914. The first battle of World War I took place in Liège as the Germans headed towards France. Despite the fact that they failed to stop the advance, the bravery of Belgian troops at Liège succeeded in delaying it for long enough to enable France to mobilize their military forces.

Fort de Loncin was built in the 1880s when it was expected that France and Germany would go to war again. Liège occupied a strategic point at the center of road and rail networks and lay directly on the most efficient route for German forces intent on invading France. For this reason a ring of forts around the town were constructed. They were made of concrete and were effectively large bunkers designed to protect their inhabitants from artillery fire.

Sadly by the time Fort de Loncin was complete military technology had moved on and the walls proved no match for the new “Big Bertha” artillery shells. On the 15th of August 1914 the ammunition store at Fort de Loncin was struck, causing a massive explosion. Hundreds of the men stationed here were killed instantly. Today the fort is a military cemetery, museum and commemorative monument. Much of the fort has been left just as it was moments after the devastation of August 1914, as a powerful memorial to those who lost their lives.

This museum houses an interpretive centre for the military history of Mons. It invites visitors to reflect on the major armed conflicts of the twentieth century by learning about some of the traumatic events in the history of the city. In World War I the city was the site of heavy fighting. Allied troops tried to hold the line of the Mons Canal in the face of advancing German forces. As British troops were forced back, it was reported that many had witnessed the appearance of an angel in the sky who safeguarded their retreat, giving rise to the legend of the Angel of Mons.

Mons was occupied by Germany during World War II, and both of these periods are covered here. Opened in 2014, the museum displays incorporate a wonderful collection of objects which really bring the past to life as you imagine who used them or who wore the uniform. Stories of both civilians and soldiers are told. A series of activities are used throughout the exhibition, including interactive tables with moving battlefield maps and holographic projections, all accompanied by splendid explanations.

Mons was where the first World War began and ended for British troops. On 21 August 1914 Private John Parr was the first British soldier to die in the conflict as British troops engaged with German forces for the first time. Four years later Private George Ellison was killed in the last few hours before the Armistice was signed on 11 November 1914. They are each buried at St. Symphorien alongside the remains of 513 soldiers from both sides who fell at the Battle of Mons. The cemetery was established by the German army during World War I, and is open to all visitors.

When this vast fortress was completed in the 1930s it was supposedly the biggest fort in the world, and was believed to be impregnable. The underground galleries of the fort extended more than 4 kilometers beneath the hill of the fort. It was built with much more care than previous forts in World War I; reinforced concrete was used instead of regular concrete, the guns were less closely grouped, ventilation was greatly improved, and sanitary facilities were closely monitored. In May 1940 the fort stood directly in the line of Germany’s planned invasion of Belgium and the Netherlands, and in an important strategic location. This line of attack would also enable German forces to access northern France by bypassing the Maginot Line.

A top secret assault was planned on Fort Eben-Emael and the three bridges it guarded nearby. German paratroopers landed on top of the fort using gliders and were quickly able to take control of the artillery defenses. The fort has been preserved and while it is still military property, there are still tours and activities at the fort. You can book a private tour for family and friends, a visit to the 120mm artillery cupola, or an underground journey to the Albert canal (torch required).

Where: Rue du Fort 40, Eben-Emael
Distance: 190km
When: Usually open one weekend per month. The fort is staffed by volunteer guides and opening times vary, so do check the calendar online to plan your visit. http://www.fort-eben-emael.be/en/visit/calendar/ For individual visitors, various elements can be added to your tour route by prior arrangement. Full details of these can be found on the website.
Cost: Adults €10, Seniors (aged 65 +) €8, Students €8, Youth from 12-18 €8, Children 7-12 €4, children under 7 free. Group fees from €90 – €240 per group depending on the tour route requested.

This imposing structure was built between 1815 and 1830 when this region of Belgium was under Dutch rule. It guarded an important strategic location above the River Meuse, but for much of the nineteenth century it served as a prison. In World War II German forces took up residence, using the fort as a prison for political prisoners and as a sorting camp for prisoners who were sent on to concentration camps elsewhere.

In order to intimidate the population of occupied regions, Hitler issued the “Night and Fog” decree in 1941. Prisoners were deported secretly, and their friends and family had no knowledge of their whereabouts. Many of these individuals passed through the prison at Fort Huy. More than 7,000 prisoners of various nationalities were imprisoned there. Today the fort, with its cells and interrogation room and rudimentary washhouses, is an intact example of horrifying Nazi practices during the war.

Where: Chaussée Napoléon, 4500 Huy fort@huy.be
Distance: 160km
When: April, May, June, September, October on weekdays from 9:30am to 5pm. July and August: all day from 10am – 6pm. Weekends and holidays: 10am to 6pm. Guided tours are available by prior arrangement.
Cost: Adults €4, Children €2, Groups €3. Free admission on the first Sunday of the month.

In December 1944 German forces advanced on Allied positions in the Ardennes region. It marked the beginning of the Battle of the Bulge, or Ardennes Offensive. Their ultimate target was the port at Antwerp. In order to secure it they would have to gain control of road routes through Eastern Belgium. Bastogne was where the major roads in this densely wooded area converged, so control of this area was crucial to the success of the German attack. It was known in English as the Ardennes offensive, or the Battle of the Bulge. To the German forces it was known as Unternehmen Wacht am Rhein, or Operation Watch on the Rhine.

The Bastogne War Museum combines the history of World War II with that of the Battle of the Bulge, also discussing the aftermath of the war. The history and impact of the war on the rest of Belgium is included. A series of well presented displays incorporate the scenes of battle with more personal stories of those involved, as well as exhibiting a wonderful selection of original objects. An informative audio guide accompanies your visit.

This building housed the US military in Bastogne at the time the German forces launched their Ardennes offensive in December 1944. The town was soon surrounded and the German commander demanded the surrender of Bastogne. From his headquarters in the basement the United States’ General McAuliffe replied: “To the German commander – Nuts!”.

The American troops succeeded in holding off the German attack until reinforcements led by General Patton arrived. Visitors can tour the famous “Nuts Basement” and learn about life during the siege. The museum is a satellite of the Royal Military Museum in Brussels. It houses their vehicle restoration centre and stores vehicles, tanks, field guns and trucks from their collection in a huge warehouse, which you can visit as part of the tour.

WARNING: The Royal Military Museum in Brussels is particularly child friendly. However, due to the subject matter involved it is worth exercising caution at the Resistance Museum at Fort de Huy before planning a visit with children.