Alain Welter is a young Luxembourgish artist whose open-air gallery and cooling tower projects are spectacular. Read on to learn more about the artist! 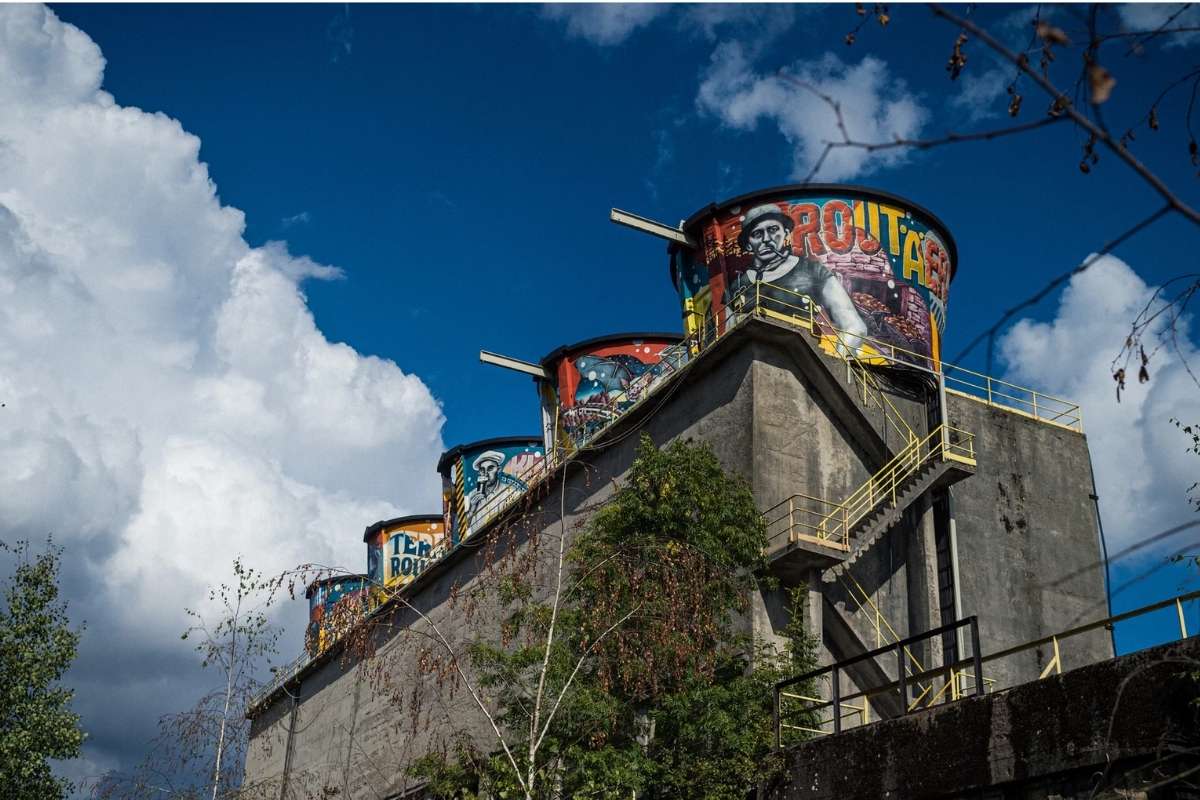 Alain Welter is a young Luxembourgish mural artist whose sole mission is to make art accessible to everyone. He has not only transformed his native village of Kahler into a massive open-air gallery, but he recently tackled the five cooling towers of the Arcelor Mittal site in Differdange. Look familiar? You might have seen this glorious artwork if you were ever stuck in a traffic jam between Differdange and Niedercorn.

The sheer size and curved surfaces of the cooling towers made this an extreme technical challenge. Humor and a critical eye for society are the motifs in Alain’s artwork. We scored an interview with Alain himself to ask about these remarkable art pieces and his experiences growing up as a Luxembourgish mural artist.

What first inspired you to create art in your hometown of Kahler?

Alain: “I used to paint on walls for many years. As I studied illustration in Berlin I tried to come up with a final thesis that would challenge myself and combine my hobby with my studies. One day I took a walk through my town and noticed that there were quite a lot of grey walls which would be nice to paint on. So I came up with the idea to transform a whole village into an urban art museum instead of only painting one mural. I grew up on the countryside of Kahler and it used to be a very sleepy place. Therefore I thought it might be really fun to bring some “urban flavours” in this little village, completely innocent averse to street art.”

Alain: Honestly I think my technique did not improve very much for the cooling towers. After several years of painting you know how to handle the spray can and since this was the most challenging project that I have ever done, I tried to play it safe and use my common techniques. For me this was definitely not a project where you try out new techniques and see how it looks at the end because it will be seen by many people for many years.

What was the most challenging part of the cooling towers?

Alain: “This project was challenging in so many ways. I think that I had never been more nervous or scared to start a project. It really began with the sketch. It was the first time I had to do a sketch that worked in a loop and then I had to do five of them, which also had to harmonize with each other. Since it is so much material, I really had trouble finding new inspiration to sketch up the last tower. It was also the first time that I worked with five assistants. You have to coordinate the whole project and stay in contact with the companies who clean the towers and those who work on the construction to make sure that you have a fluent transition to start working on the next tower. When I sketched up the first tower I was pretty nervous because I didn’t know if all the themes were going to work out in a loop. But after a certain time I got so used to it that the fifth and final tower was three quarters freestyle and done in around one week. Another very challenging part of this project was the space. The most important part about painting a large scale mural is the distance. Since the cooling towers can only be seen from the street I had no other place where I could see if my proportions were correct or not. And since I also painted realistic characters, which I’m not used to painting, this was very hard to verify. At the end you only saw what you painted when they built up the construction of the tower. So it was like five little surprises if I had nailed it or not.”

Wow, so much more goes into the construction of this art than anyone ever realizes! You mentioned the inspiration that goes into creating a project like this. What does this piece represent to you?

Alain: “This piece means a lot to me. The moment when the “Ville de Differdange” asked me if I would be up to spearhead this project I was super hyped. This is probably a once-in-a-lifetime project and definitely a bucket list check for every mural artist. It also tests your endurance and limits. The first half of the project was lots of fun to work on but after a certain time you just want to get things done, have a vacation or start working on other projects. In the end it is an unbelievable feeling when you finish such a grand project.”

We can only imagine the feelings of pride and satisfaction after completing such a difficult, extravagant project. One final question: What do you hope people get from this piece as they drive by?

Alain: “The main theme is the history and life in the south of Luxembourg. So this project is not only meant for the habitants in the “Minett” but it is also an interesting story for people that are just passing by. I guess it is a topic that involves everyone, since there are so many figures and letters, shapes and colors to discover. At the beginning I didn’t know if I, as a non “Minettsdapp”, am in the position to illustrate what the south stands for, since the people in the south are really proud of who they are and what their history is. But while working on the project, my assistant and I got so many congratulations by the habitants of the town that was beyond all question.”

A huge thanks to Alain for his incredible contributions to Luxembourg and also for his hard work and determination to make art accessible to everyone here. We cannot wait to see what he works on next!

Follow @alain_welter to keep up with his art pieces and hear more about his inspirations.