Now, more than ever, there is a call for women to speak up and speak out – it is a call to vocal arms. But are we doing enough? Are we being heard? Julia Elisabetta Pitterman discusses the importance of women in politics. 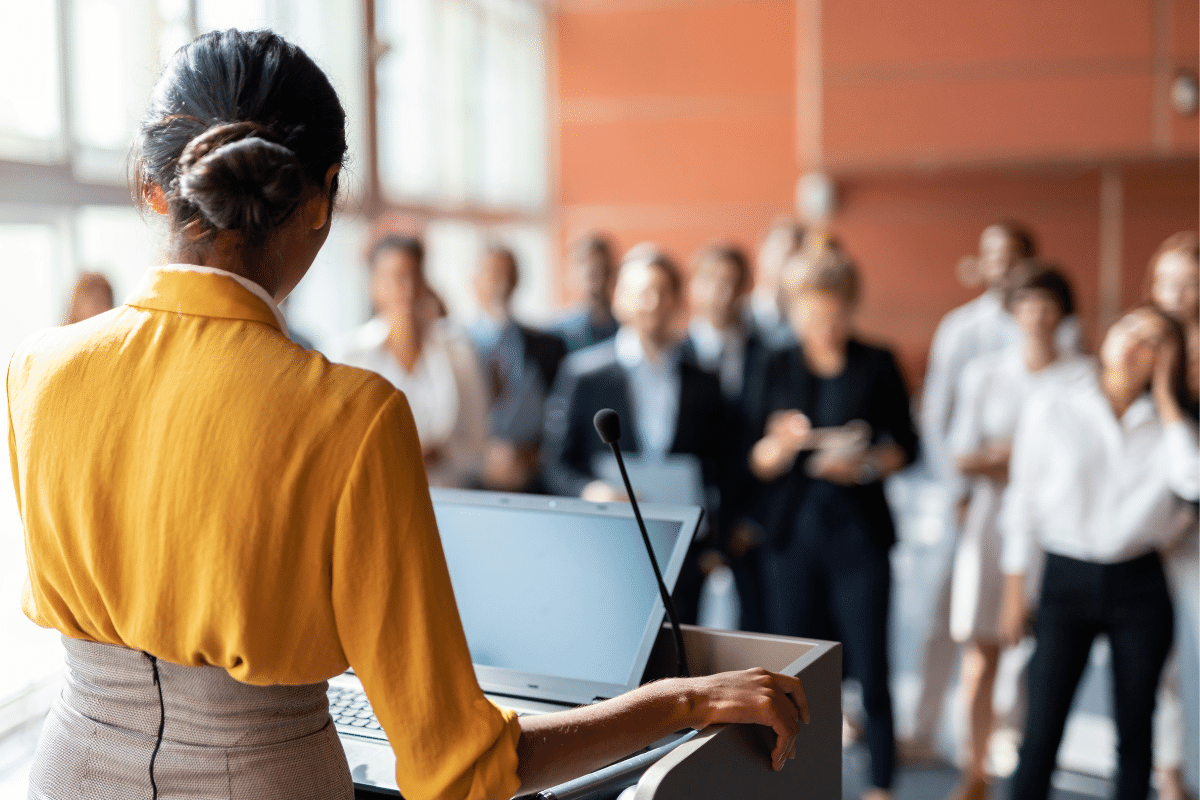 With all research showing the positive effects of women in leadership positions, I still remain puzzled when reading that female heads of state or governments remain a minority. With all the issues that we, humans, have been able to overcome, how is it that we cannot change the current situation regarding women in decision-making positions? How can we accept that no country in the world is on track to achieve gender equality by 2030? The frustration and astonishment when looking at the current statistics of women in decision-making positions, as well as personal stories of women trying to break the glass ceiling is one of the key reasons I decided to run in the 2019 European elections for Volt Luxembourg.

As a strong believer in democracy and its principles, I saw – and still see – gender inequality in many different aspects of life and felt it was impossible to let it go unnoticed.

I saw it as a duty, as both a woman and citizen, to get involved in the European elections despite the myriad of barriers that possibly lay ahead – starting with the fact that I was running in Luxembourg and didn’t speak Luxembourgish. The many barriers, however, were not enough to refrain me from actively taking part to become the only non-Luxembourgish woman running in the 2019 European Parliament elections.

Thanks to Volt, my vision was clear: change the way we do politics. This included bringing the issue of gender equity to the table in as many debates as possible so that there could be increased awareness. For those not aware, gender equity places emphasis on fairness and justice when dealing with gender rather than simply applying the “let’s enforce equality” formula. This ensures that the differences, whether they be biological or social, be taken into account when enacting policies focusing on gender issues. It reinforces the central idea of differences being a strength for women – something I deeply believe we should showcase as much as possible. Running in the European elections meant that, ideally, most discussions focused on what the Europe Union of tomorrow should be and how to get there.

To me, the EU of tomorrow meant gender equity where one could benefit from an equitable representation of women in legislative bodies, taking as an example Rwanda where women make up 56% of parliament. As such, I tried to create a campaign that focused on how to achieve gender equity and surmount the many obstacles we have to face today as women – especially as women in the workforce. But, what is a key decider in achieving gender equity?

It’s a diverse community of women taking part directly and indirectly in the political realm. To me, the community-building aspect was fundamental as I believe an ever-growing network of women willing to help each other will be essential to winning cultural and sociological battles.

One of the many questions I was repeatedly asked throughout the campaign, which I will never forget, had to do with my lack of ‘official’ political experiences. In other words, how can I take part in politics seeing as I had never held office or been a politician? My answer was simple. I responded that you don’t need to be a politician to deal with politics. Politics is what happens in our daily lives yet we aren’t labelling it as such. As women, we constantly need to deal with political situations at home, at the office, or in other groupings. By tackling societal affairs, we are taking part in politics. So, what makes this different than getting involved in politics per se? The truth is that we tend to perceive the ‘official’ political career as only restricted to the few while I truly believe, and this is why I decided to run, that candidates in any election should represent the diversity of their respective countries. In other words, everyone should have a voice. Indeed, the more a government represents the composition of society as a whole, the more stable its policies are likely to be.

The United Nations uses two indicators as benchmarks for progress in gender equality. Firstly, the proportion of seats held by women in national parliaments and local governments; and, secondly, the proportion of women in managerial positions. Despite some progress, we fall short on expectations set by the 2030 Agenda. Needless to say, current and future generations will need to deal with the ramifications of not removing the existing shortcomings. As supporters of democracy, we must always keep in mind that women’s political participation and leadership are necessary for peace and economic growth. We need to fully acknowledge that if women are not holding political and leadership positions then democracy cannot function effectively.

The urge to act becomes increasingly fundamental. Indeed, the World Economic Forum points out that 90% of countries have at least one legal restriction impeding women’s full participation in the economy. Is this really the type of political system and societies we want to pass down from generation to generation? Women in the political sphere could encourage the broader participation of women in the economy by mainstreaming gender policies as needed.

The truth is that we can achieve gender equity. The diagnostics, together with the needed tools, do already exist. Throughout the campaign there were different visions concerning quotas. I perso- nally believe that they are essential and have helped the cause, yet our energy should focus on eliminating the underlying barriers that women face in getting nominated for decision-making positions or, simply, conducting successful campaigns. An example of such a barrier is a lack of access to financing or a weak professional network, as can be found in a variety of research.

If there’s a gold realisation from the campaign that I’d like to share with you, it’s the following: everything comes down to the willingness of political parties. They are responsible for the in-take of aspirants to decision-making positions and, as such, can also find resourceful ways to support female candidates. Women should be encouraged to run since it’s the smart thing to do as we are all well aware of the different benefits women bring to the table – it’s only a question of do we want to tap into these new opportunities? There is no one-size-fits-all solution to gender inequity in politics yet there’s plenty that can, and should, be done to ensure that women’s voices are heard.