The world needs more people like Sandrine Gashonga. She is one of those rare individuals who sees injustice and takes action, determined to improve the lives of others. 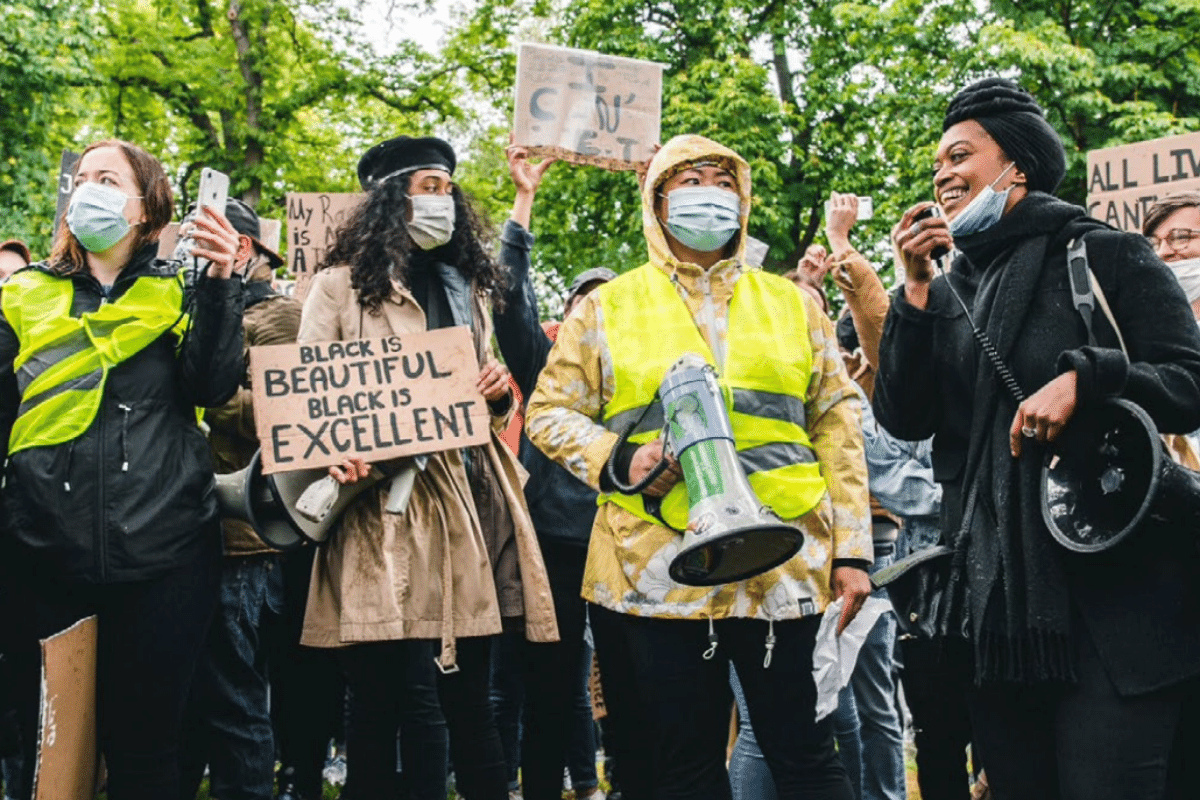 Born in Rwanda in 1977, she arrived in Luxembourg in 1997 as a refugee. With a passion for human rights, she threw herself into activism in 2013 by volunteering for Amnesty International, Luxembourg. Since then has changed her entire career path, leaving the financial sector behind in order to dedicate her life to promoting cross-cultural communication and acceptance, as well fighting discrimination in all its forms. Co-founder of the Letz Rise Up movement, this anti-racism and anti-sexism activist truly embodies our values to “(Em)Power, Inspire and Thrive”.

A sunny terrace near Luxembourg City. Two women meet after the long weeks of lockdown. There are smiles under masks and elbow bumps as they take their seats and order coffee. Wow, it’s hot is the consensus as they wait for their drinks to arrive. Just a couple of girls enjoying one of their first outings in months. True, but beyond the happy greetings, there was something serious being discussed.

Sandrine Gashonga is an educated woman with an excellent sense of humour, able to remain positive and lend a smile while discussing the darkest and most serious of subjects – racism. Please note that in this article, we are referring to the racism experienced by Black people, of mostly African descent. People discriminated against because of the color of their skin.

An enormous subject that began hundreds of years ago, it is impossible to do justice to all its many and varied incarnations within the cover pages of this magazine. As such, Sandrine shares the story of how she moved from being a financial sector professional to become the inspirational activist she is today, as well as throwing light on the situation in Luxembourg.

In 2010, the Luxembourg Government’s Ministry for Family and Integration launched a call for people who would like to be trained in inter-cultural competences. The idea was to train a number of candidates who would then go on to instruct others in government administrations to work with refugees in Luxembourg. Having already developed a passion for human rights, this former company secretary put her hand up.

For a time, Sandrine juggled her role as cross-cultural facilitator with her career in the financial sector before becoming an independent trainer on a full-time basis in 2014, choosing to dedicate all of her time, energy and considerable personal resources to the cause of cross-cultural acceptance and integration. To this end, 2019 saw Sandrine do two things – she joined the CoBees cooperative (part of the REconomy initiative) and co-founded the activist group Letz Rise Up.

“The aim of the REconomy project is to promote the launch of initia- tives which contribute to a more inclusive, democratic society that consumes fewer fossil fuels and thus participates in the fight against global warming,” Sandrine explains.

“As part of this, it is among the objectives of CoBees to assist in smoothing out any bumps for entrepreneurs looking to launch such projects, and increase their chances of success by offering them a common legal structure, a service platform (accounting, VAT, marketing…) and solidarity mechanisms. The latter is where I come in.” (www.reconomy.lu)

“Inclusive, democratic and solidarity” are the keywords here for Sandrine and form the basis of the training that she provides. A good example of this in action, as well as a perfect example of a common inter-cultural issue in Luxembourg, is Sandrine’s work at Foyer Sud, a safe house for women in distress.

Specifically, the problem was the issue of languages. “When the Luxembourgish employees were at the coffee corner they naturally chatted in Luxembourgish. However, the women in the refuge who came for coffee felt excluded from the conversation because the majority were foreigners and did not speak Luxembourgish. This situa- tion created tension.”

“Thanks to the training, residents and employees felt enabled to find solutions and went on to set up an action plan to improve the situation. They decided to set up “linguistic zones” at the refuge. For example, at the coffee machine the employees would speak French, and only between themselves would they speak Luxembourgish.”

“This is the aim of the training. To guide participants towards a solution themselves rather than impose rules on them. It is their environment and so they are the ones who can find the best answers. We are there to facilitate the decision-making process.”

According to Sandrine, the question language goes deeper that it first appears. “Language is an instrument of power. It is a tool of domination. Negotiations over which language to use in a meeting, for example, are much more than they appear. It is about identifying who is really in charge, who gets to make the decisions. In short, who belongs here.”

As her career as an inter-cultural facilitator progressed, Sandrine came to realize that,” … there were certain aspects which were not being addressed, notably racial discrimination.”

Be warned, the next part of our conversation with Sandrine makes for uncomfortable reading in parts.

“There is a problem with racism in Luxembourg and it stems as far back as its colonial past, which is not widely known because the country tries to delete from its memory. We must face our past, however, it is part of our communal history and is the foundation of the racism we have today.”

Sandrine defines colonisation as, “Going into a territory where there are Black people, reorganising their lives completely and ranking their value as human beings.

The origins of racism itself go even further back than Luxembourg’s colonial incursions and can be summed up in a single word – slavery. Around 400 years ago Black Africans were chained and beaten and forcibly taken from their homes. They were shipped by white Europeans, in appalling conditions, to Europe and the Americas where they were tortured, violated, branded and sold like cattle before being forced to give their lives and their freedom to make money for their white owners.

“At this time, a certain group of humans decided that another set of humans were less than them, were not even human in fact. These people were dehumanized in order to justify their exploitation for economic reasons.”

“The past is beginning to resurface, however, following the murder of George Floyd at the hands of Minneapolis police on 25 May 2020,” Sandrine explains. “The outrage this sparked around the world and the resulting #Black Lives Matter demonstrations have granted visibility to the questions of systemic racism and white supremacy.”

Indeed, Luxembourg held its own demonstration outside the US embassy on Friday 5 June 2020 where more than 1,000 (suitably masked) participants took part in a passionate yet peaceful protest.

“We were incredibly happy to see so many people attend, young people of all colours. I was especially proud to see the number of young Black people who came along. It shows that they be politically mobilized for something that affects them. They will no longer remain silent on the subject.”

June’s demonstration in Luxembourg was organized by Letz Rise Up an activist organization that Sandrine co-founded in September 2019 and still presides over today. “Letz Rise Up is a feminist and anti-racist association made up of women whose goal is to join forces to defend and support people likely to suffer discrimination because of their gender, race, religion, sexual orientation or their disability, to work for their well-being in Luxembourg society, and act for the social transformation of society in favor of people subject to discrimination.” (www.letzriseup.com)

It may come as a surprise to learn that Luxembourg needs such an organization given that just about every single piece of promotional literature on the country touts its welcoming, multi-lingual and multi-cultural societies among its strengths. Ask a Black person in Luxembourg how welcome they feel though, and you are likely to get a different answer.

In fact, the Second European Union Minorities and Discrimina- tion Survey did just that in 2018. It found that “Black people in the EU face unacceptable difficulties in simply finding somewhere to live or getting a decent job because of their skin colour. According to findings from a major repeat survey by the European Union Agency for Fundamental Rights. Racist harassment also remains all too common.” (https://fra.europa.eu/en/publica- tion/2018/being-black-eu) The survey looked at the experiences of nearly 6,000 Black people in 12 EU Member States and the sobering results found Luxembourg to be one the countries in the EU with the highest level of discrimination based on skin color.” A shameful 52% of Luxembourg respondents claimed to have experienced racial abuse of some kind in the pervious 5 years. Not a statistic for the promotional literature. For Sandrine, the survey results did not come as a surprise, but she is disappointed at the government’s response.

“Following the survey, every European country was obliged to set up an action plan against racism. But instead of doing that, Luxembourg has an action plan for “integration”. They will not use the word racism. In fact, these projects are oriented in such a way as to not include racism at all.

Even the associations set up specifically to fight against racism have only been carrying out integration projects over the last few years. This is one of the main reasons we launched Letz Rise Up, to look racism in the face and fight back.” The subject of racism is vast and comes in many guises. In Luxembourg, Sandrine says, “Black people are discriminated when it comes to recruitment and housing. Some property owners and employers will not rent to or hire Black people. The government knows this practice exists but does nothing about it. It is not a priority for them.”

The education system is another example. “Schools’ insistence on proficiency in the German language to access certain higher education streams is a barrier to many students of African decent who tend to be more competent in French.” According to Sandrine this then limits their employment possibilities after school. “Ask yourself, how many Black CEOs or other senior people do you see in Luxembourg companies? Is this truly representative of the number of Black people who live here?”

As the world fights to find vaccine for Covid-19, Sandrine calls on all of us of all colours not to forget that, “Racism is also a deadly virus. It has been killing, maiming, destroying lives and entire cultures for 400 years. Let us pull all our resources and work together to cure this killer once and for all too.”

To all of us in Luxembourg specifi- cally she insists, “Do not wait until there is another George Floyd. Just because it has not happened here yet, does not mean it cannot. We do not need to wait until someone dies to put anti-racist strategies in place.”